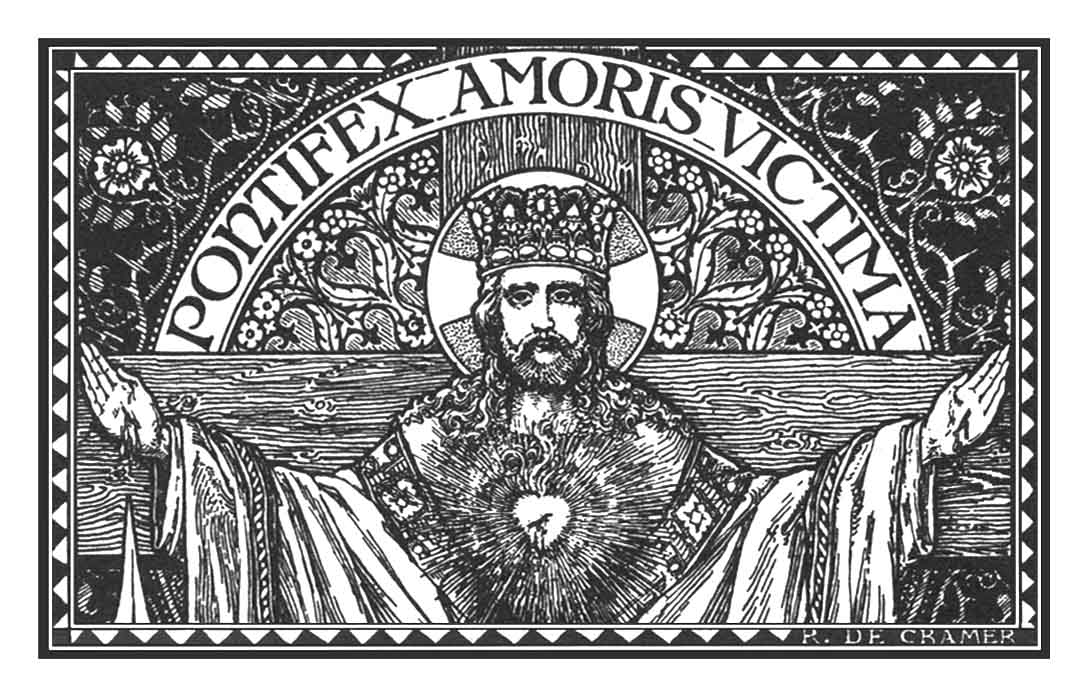 Today is the final Sunday of the liturgical year.
It is therefore celebrated as Christ the King Sunday.
All things considered, the observance of this day does not go back too far:
In 1925, Pope Pius XI issued a document, Quas Primas, that instituted something called
The Feast of the Kingship of Our Lord Jesus Christ,
And the logic he employed in doing that was adapted by many, including Anglicans like us.
The Pope wrote that “If princes and magistrates duly elected are filled with the persuasion
That they rule, not by their own right, but by the mandate and in the place of the Divine King,
They will exercise their authority piously and wisely,
And they will make laws and administer them, having in view the common good
And also the human dignity of their subjects.
The result will be a stable peace and tranquillity,
For there will be no longer any cause of discontent.
Men will see in their king or in their rulers men like themselves,
Perhaps unworthy or open to criticism, but they will not on that account refuse obedience
If they see reflected in them the authority of Christ God and Man.
Peace and harmony, too, will result;
For with the spread and the universal extent of the kingdom of Christ
Men will become more and more conscious of the link that binds them together,
And thus many conflicts will be either prevented entirely
Or at least their bitterness will be diminished.”

Well and good. May it be so.
But when I say “king,” what’s the first thing that comes to mind?
Do you think of Jesus Christ the King?

I think of a powerful, nameless, self-possessed monarch who’s probably sitting on a throne.
Upon his brow is a crown; and in his hand, a sceptre, to show legitimate power and authority.
He wears the finest garment that can be produced within his kingdom --
The best material, the best workmanship.
He is bearded -- which I think is a sort of visual shortcut for the idea of being a wise elder.
In every outward way he is vested with his office,
Which is more than a job -- it’s an identity -- to use power wisely and for good.

Inwardly, the king is always aware that he is never really alone.
He is surrounded by many others -- a queen, a court, religious authorities, knights and ladies --
On a big night, perhaps esteemed visitors and jesters, musicians.
People come to hear him render judgments and make shrewd decisions.
If he is a just and fair king, then his interest is in helping those he was born to serve.
He may have children who are in training to receive crowns themselves some day.
And all of these people depend upon the king, in as much as it’s possible,
To be steady as a rock; to pay no heed to to pain, or to matters of only momentary significance.
For as the king goes, at least in the day-to-day sense, so goes the kingdom.

This is what occurs to me when I think of a king.
I do not, I must confess, immediately think of the reign of Jesus Christ.

And, I’m aware, too, that the word-picture I’ve been drawing --
This overly romantic and simplistic picture -- is that of a medieval king --
A king molded in the tradition and practice of of the Western mind, from the Middle Ages.
It has little to do with how First-Century Jewish Palestinians from rural parts of the country --
People like Jesus --
Might have conceived of a king themselves, should the subject should have ever come up.
But that’s where a lot of us tend to go first: To the Western imagination, the English, perhaps:
To the royals of the present-day who have yet to be crowned --
To Charles, Prince of Wales, or to his sons, William and Harry, kings in waiting;
... To kings past, with names like Henry V and James VI and George III;
And then perhaps to kings of antiquity, outside the West, like Tutankhamen or Hammurabi;
And then perhaps to kings made famous by legend, like Arthur;
And perhaps at the last to figures arising from fiction --
Aragorn or Legolas, kings-to-be in Middle-Earth in JRR Tolkien’s books,
Or King Peter, King Edmond, from CS Lewis’ Chronicles of Narnia.
We have a certain picture in our minds, molded by centuries of practice.
Traditions firmly rooted in a much-earlier era of castles and nation-building,
But an era that nevertheless lies between us and Jesus whom we acclaim as our first king.

To add to this, there is the special problem of Americans’ love-hate relationship with kings.
On Friday of this past week, we were forced yet again
By an important, fiftieth anniversary
To remember the horrible and cold end of what was admiringly called “Camelot” --
The end of a presidency and what it stood for, and how its players were conceived:
The slaying of John F. Kennedy, Jr., our charismatic and promising President in 1963,
And the closest thing to “royalty” many can still conceive of in this republic.
We remembered his queen, at his side in the car in a tragic hail of bullets,
And his princely brothers, and his children, as they came and mourned his passing.
It’s difficult to know precisely what to do with this.
Yet it’s held today as a fact that even in a country
Founded on the principles of self-governance and representative democracy --
Even in a country that was defined in its beginnings as being precisely opposed to kingship --
We still look for divinely-mandated royalty to appear among us and lead the way.

We seem to be at war with ourselves over this matter of kings.

In May of 1782, seven months after the British surrendered at Yorktown,
One of George Washington’s officers, Colonel Lewis Nicola,
Wrote to him saying that during the war, the Congress had proved ineffective
At providing the functions of government.
Nicola suggested Washington consider the idea of becoming King of the United States.
The same day, Washington wrote back, saying,
“No occurrence in the course of the War has given me more painful sensations
Than your information of there being such ideas existing in the Army as you have expressed,
And I must view [them] with abhorrence, and reprehend with severity.”
“You could not,” he wrote, “have found a person to whom your schemes are more disagreeable.”
“If you have any regard for your Country, concern for yourself or posterity, or respect for me, ...
Banish these thoughts from your Mind, and never communicate,
As from yourself, or any one else, a sentiment of the like Nature.”

That was 231 years ago, and you can still feel the tension.
We keep looking for royalty.
We still want that king and that queen -- a distant, romantic attachment to a monarch.
There’s a part of all of us that wants to be able to point to someone in particular
And say, That one! Right there! That’s the one we’ve all put our hope on when times are good.
The one we’re ready to heap all our sins upon when times get tough.
And we admit them to those rank,
Despite whatever General Washington wrote to his Colonel,
And despite the fact that we have no actual crown to put on anyone’s head.
So our royalty is legion.
American royalty walk down the central aisles of Congress, even as we despise them;
They walk the halls of Fortune 500 companies, though we’re jealous of their success;
They walk across the red carpet at the premieres of their own films;
Their moves are scrutinized by the press and imitated by fashionistas.
They stare at us from the covers of magazines in grocery stores;
They write children’s books and cookbooks and have millions of followers on social media.
They get divorced or go on talk shows or grow baby-bumps,
And we obsessively press for further details.
Their opinions somehow have greater weight than those of ordinary folk.
And some of them, to our great fasincation and frustration,
Are merely “famous for being famous.’
But nearly all of them are happy to accept the title and the mantle of King, Queen,
Because they know the game -- Americans are people too,
And at the end of the day, people love their royalty more than they reject them.

Here is the bottom line.
No matter how much we want a king or a queen,
The only king -- the only Christ, that God saw fit to send us
After generations of watching and waiting --
Was the one who took the form of a slave, and who obediently humbled himself.
The king we have been given could not be further from the one we wanted.
When he reached the moment of his coronation,
The only title he was given was a title to mock and revile him: King of the Jews;
The only crown he wore was woven from branches of thorns;
The only throne he was given was a wooden cross,
Not on which to recline, but on which to die.
The only righteous judgments he rendered from that throne
Were words of forgiveness, healing, and the restoration of the community of the faithful.
He was no idol-king like we would ever cast for ourselves to follow
Even if we had all the gold and all the time in the world in which to do it.

And it isn’t like we’re just stuck with him.
The stakes are far higher.
He does not fade in and out, like the kings of old or the celebrities of the postmodern age.
We’re told to conform ourselves to the life and teaching of this one king,
To mold ourselves according to his example --
And to be subjects of the Kingdom of God, ...
And little wonder but we sure find this hard to hear, much less to do ...
There’s no comfort in it; no titilation; just the promise of hard work.
So we go off, instead, in search of a simpler king made more in our own image --
A victor, a winner. A more clear-cut king.
Someone who knows the score, someone who has it together.
And we crown them instead.

We’re therefore left with this supremely ironic task.
We have to embrace exactly the kind of king that makes us rankle and turn up our noses.
There may be little comfort in it.
Yet it’s the work that we’ve been given to do.
Can we learn to be the subjects of Jesus Christ our good and gracious King,
And live as faithful men and women in the empire of God?
It’s the tension we should feel and the work we should expect whenever we pray,
“Thy kingdom come, thy will be done.”


May God give us strength to live out what we say we believe!
Posted by The Rev. Torey Lightcap at 6:12 AM