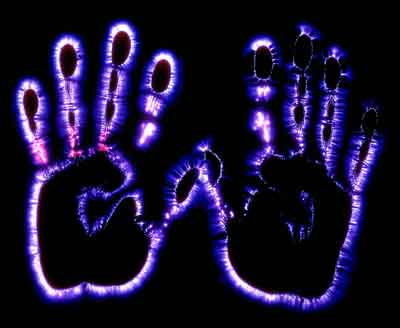 
When Cuba Gooding Junior’s character says “Show me the money!” in Jerry Maguire,
He’s saying that if you pay him well, then and only then will he be a star for you.
Give up the coin, he dances.
When Jesus asks to Show him the coin, and then he casually hands it back, he means to say
That any one little thing you can point to is pretty insignificant next to, say, everything else.


He looks at the coin. Whose image is on it? Caesar’s.
It is a small thing. Caesar was terribly important to the time,
But in the larger scheme all he ever was, was just one little person.
A miniscule image on a tiny coin.
In the context of the size of the entire created order, to borrow from Neil deGrasse Tyson,
Caesar’s head on a coin is a speck ... on a speck ... on a speck ... on a speck ... on a speck.
A picture on a coin in the hand of one person ... standing on the crust of the whole round earth ...
Which is itself a lonely thing in a solar system out on the edge of a massive galaxy ...
That is separated by immeasurable cold vaccuous space from 100 billion other galaxies
That themselves make up only just a tiny fraction of the total universe ...
Which, we’re learning, in all likelihood is not even the only universe there is ...
But may be perhaps one out of -- what? billions, maybe.


With just a few carefully chosen words, Jesus puts the Emporer in his place.
He’s nothing special, and neither is his picture.


So that’s the first point. Everything is God’s.
Go ahead and Render unto Caesar; that’s nothing;
Because God is everything, the all-in-all.


Nothing as we know it could possibly exist without energy;
Nothing would hold together;
Certainly we and everything we know would cease to be.
Everywhere that is anywhere, energy is being held and expended and created and recycled.
Our bodies; this building; these words I speak, and you taking them in.


Every little expenditure of energy is a vote for something.
The heart in your chest votes its energy to keep the blood pumping.
The liver that’s below it votes for regulating the composition of blood and processing nutrients.
The brain up top votes its energy to a whole host of tasks,
Including a lot of the things that make humans human.
So there is involuntary energy-voting, and then there is voluntary energy-voting.
When you’re looking at a cookbook and doing menu planning,
You vote for Salisbury Steak instead of Chicken Kiev,
And your energy goes that way.
Actually, we voluntarily vote with our energy all day long:
Standing instead of sitting; Pepsi One instead of Coke Zero; Target rather than Walmart;
Exercise instead of cookies (!), cookies instead of exercise (!);
Cruelty-free makeup instead of whatever was on sale;
A pet hamster instead of a pet gerbil. See? This, not that.
You’re voting where your energy’s going to go. And there it goes. Sure as it comes back.
Not to put too much pressure on us,
But with every decision we make, every time we vote about how to expend our energy --
No matter how seemingly insignificant those decisions  --
We also make moral and ethical statements about our priorities.
Sometimes the smallest decisions have the greatest impact.


In the end, nothing less than our whole lives end up
As the demonstrated accumulation of a lifetime of votes
About where we wish to place our energy.


Now, you heard a lot of talk in the Gospel reading about money.
Money is also a form of energy, a unit of energy.


It’s a very symbolic form of your energy, in a neat little package.
And just as we vote our energy into this cause or that cause,
We dollar-vote as well.
I’ve already mentioned a few instances. Here are a few more.


You may choose to vote all your dollars, expend all your energy,
On a car that’s beautiful and loaded with features;
But if you don’t save a little money back for insurance and gas,
As a car -- well, I guess you can admire it while it sits in the garage.

You might vote your dollars and energy into an all-caramel diet.
Why not? Might be fun. It’s that time of year. It could happen, right?
How long could you keep up that charade?
Probably until your family doctor looks at your chart and says,
“Hey, buddy, it’s me or the caramels.”


You may choose to invest all your dollars and energy
Into making yourself the most beautiful or handsome person in the world.
A real swan, or a real hunk.
Of course there’s an industry already hard at work for this
That would gladly take every last cent.
And you could get temporary results and temporary satisfaction.
But it wouldn’t last forever, would it, and we all know it.


Dollar-voting, energy-voting: Not only must it honor the fact that everything belongs to God;
It must also strive to be sustainable, create balance, and maintain health.


Now, let me bring this home.


Praying over this for the past month or so, I have had this question beginning to form up.
I bring it forth now for wider consideration.


When a body expends more energy than it takes in,
There’s usually some small moment of crisis that puts that body in front of a doctor,
And the doctor runs down the list of what-all can give that body the energy it needs:
Are you eating right? exercising? meditating? getting enough sleep? etc.
In other words, Are you doing all the things that give you life?


Many members of St. Thomas are generous to a fault with their energy-voting and dollar-voting.
We have a number of very good ways to help take care of people, usually perfect strangers,
Mostly involving feeding them.
“We feed people,” I have liked to say,
Realizing there are a hundred ways you can do that,
And that we’re probably good at 99 of them.
This is commendable to a point.


What happens in a body when all the energy is moving in an outward direction --
In 99 outward directions? And there isn’t enough happening to properly power that energy?
It gets run down; it gets tired and cranky;
If it fails to heed the warnings of its doctor,
Eventually it gets so tired and cranky that it powers down.
I’m wondering if our church, like many churches,
Isn’t suffering a bit from the chronic tiresome chaos of doing too much
And not taking enough sustenance in to counterbalance the exchange of energy.


I would like for us to somehow begin to talk about this --
To have holy conversations and to seek out the many right answers that exist
As together we continue to explore the question
Of whom God has given us to serve,
And what great service looks like.


We are very good at serving the world;
But are we looking after ourselves and each other?
Notice, please -- Not, Are we navel-gazing enough? Are we pulling in and ignoring the world?
But --
Are we taking in the things that bring us spiritual sustenance each day?
Are we being built up as disciples of Jesus Christ?
Are we fed so that we can be fearless,
As he was fearless
When he looked at that coin and told the Emporer to take a flying leap?


Is there enough good energy coming in to keep powering all that amazing ministry?
Is the Body of Christ at St. Thomas sustained, balanced, and healthy?
It’s a question worth exploring.
The answers we find together in our conversation
Should bring us to a clearer path of action and more effective work in the world.


I want to maximize every dollar and every ounce of energy that is voted to St. Thomas.
I want to see us energized by renewable resources that don’t run dry.


In the end, I want to see each of us and St. Thomas together
Working and living and praying and loving
As part of that cosmic reality:
Everything belongs to God already, and we are simply doing our part.
Enough energy going out; enough energy coming in; balanced, healthy, sustainable.
Jesus reminds us, when he hands that coin back,
That that’s how it is;


And he invites us to live our lives as a reflection of that truth.

Posted by The Rev. Torey Lightcap at 6:08 AM